Disclaimer: To many a person's surprise, I am indeed being honest, if a little exaggerated, in my opinions of Panty & Stocking with Garterbelt. Please excuse me if I have ruffled your feathers over such a review. (I know this is the same disclaimer as Gatsby and Death Note, what do I like anyway...).

Currently on an indefinite hold, this show is going to break me. 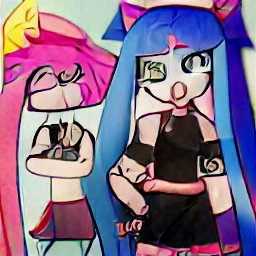 Panty & Stocking, where do I even begin? As of late, due to an impending crisis that may manifest itself within a year, I have turned to seeking out new anime as escapism, the only problem is I have encountered a bit of a sour patch,... kids (he he so funny, somebody please make me stop). Anyway, Panty & Stocking was among the first of these anime to be checked out and I was just surprised at how unintelligible and frankly insulting to my intelligence it was. I will start off by taking the first episode (of the dub), and comparing it to the first episode of The Simpsons, Futurama, South Park, Ren and Stimpy, Family Guy, Bob's Burgers, King of the Hill, 12 Oz Mouse, Super Milk-chan and, finally, Drawn Together (the show from which Panty & Stocking draws the most inspiration from). This will be done in passing mentions to the plots of the first episodes of the shows referneced, with the exception of Drawn Together, as this is what most directly influenced Panty & Stocking.

POOP IS FUNNY PEOPLE! WAKE UP!

Apparently, this is what Japanese people think western adult animation is like... I am going to call this codswallop, if I do say so myself. The first part of episode one features toilets sucking people in, believed to be the result of a ghost. I am just going to pause the plot syopsis here to be bring attention to the idea of toilets sucking people in. As someone who got sucked down into a toilet (that is, getting stuck in the seat from the suction), I can confirm that ghosts are not responsible for this. Now before anyone says that "This is a comedy that parodies American cartoons" or that Japan has more high-tech toilets than us in the West (no, seriously, look it up if you want), but the fact of the matter is "show, do not tell" when it comes to storytelling for a television show and Panty & Stocking only showed this halfway through the segment. Speaking of halfway through the segment, the ghosts materialize to become a monster, there is no lore to this, so just go with it, and it is intent on flinging feces everywhere (some motive), but never fear Panty and Stocking are here. Panty & Stocking put an end to this, with vomiting puncuating in betwwen all of the action, thus saving the day. I know it is supposed to be humorous, but is western adult animation inappropriate? Yes. Does it rely on swearing and poop for its entire premise, plot and humor? No. The Simpsons, Futurama, King of the Hill and Bob's Burgers stayed away from more inappropriate stuff entirely, going for the option to be a PG "family" show with more adult themes and messages, and while Ren and Stimpy and Family Guy relied a little bit more on bathroom humor, they were more tame in language. When it compares to gag humor anime, it also falls flat, lacking the innocent charm that a lot of series, like Kinnikuman and Dr. Slump have, so it more comparable to Super Milk-chan which makes jokes targeted more towards adults. What sets Super Milk-chan apart from Panty & Stocking is how it handles rude and inappropriate concepts: Super Milk-chan occasionally adds something taboo and not for younger audiences in each of its segments, like realistic violence, poor mental health or drugs, while Panty & Stocking beats you over the head with swearing, insults and toilet humor, making it seem more childish than anything else. Then there is Drawn Together, a show which parodies superheroes and children's shows, including anime like Pokemon, with a reality television type of setting. The show itself is alright, nothing to write home about, but there was more variety when it came to humor, though most of the jokes were too inappropriate for me to write about here, all I can say is that it goes with the reality television parody by including cheap melodrama in the episode's plot. While Panty & Stocking does this too, it is where the similarities end, since the melodrama of the plot does not work in this sense of parody. Additionally, because shows like Super Milk-chan which parodies Saturday morning cartoons, like Animaniacs, exist, so the idea is not entirely original and has been done better before.

So, is it funny on its own?

It depends on what makes you laugh. Comedy has a process to it, but it is up to the audience to find something they define funny. With this segment I laughed exactly zero times. That was 15 minutes of unfunny comedy, but your humor may be different. If you like a well written and clever joke, then this is not for you. If you laugh at toilet humor, swearing and sexual humor, without any higher qualities, like commentary, then this is what you would like. Apparently, most otakus have the latter sense of humor, so this puts me in the minority

LIFE IS A FAST DRAIN!

This series has one joke/explanation. Panty's... Panties. They become a weapon, usually a gun in order to destroy monsters. In this episode, they are taken from her by a ghost who takes on the form of vehicles which get possessed. This results in a lot of chase sequences, even before Panty uses her pantie (I feel so weird talking about this, I must apologize if the reader feels uncomfortable) all culminating up to a fight on a high speed train and the train's destruction, Panty & Stocking save the day once again. There is not really a lot to talk about with this segment and unto itself, it is not bad. This might be because I am trying to block things out, but the worst thing about this production is that it is forgettable, with a side of uncomfortable. I would recommend watching this segment if you are looking to try this series out, but aide from curiosity or an appetite for the abyssmal, why would you watch this show, anyway?

Enough of that, I will cover the next episodes in the long term. Fair warning: episodes 2 and 3 nearly broke me. After seeing them thrice, I need a *long* break.

As a foot note, apparently, my humor sucks, according to a friend of mine, for not liking Panty & Stocking. While I will say that comedy has a method and can be seen as objective to a degree, what makes people laugh is subjective. In other words, my sense of humor does not suck, we just laugh at different things.